After engaging in the second session of mediation, it was clear that there would be no further movement from the district on pay. They told the mediator in a private session that 3% one time was their final offer. The JESPA bargaining team and members anticipated this and were prepared to move to the next stage of impasse, which is fact finding.

JESPA members had already met and participated in surveys. We discussed possible next steps in detail.  RESPECT was a big theme of the discussions. The administration’s and Board of Education’s decisions and practices do not value the critical work that ESPs do, and members overwhelmingly have decided to continue the process of negotiations and proceed to fact finding if mediation does not bring about an agreement.

After reviewing a lot of information and engaging in dialogue, members emphatically said, let’s continue mediation and go to fact finding.

Why? The district has not been transparent now or in the past regarding budget numbers.  A third party arbitrator reviewing the facts and making a determination around the numbers is necessary at this point. Members also expressed that this boils down to demanding respect and building power for future fights which is infinitely more important than a few hundred, one-time dollars. If we aren’t noticed or respected for our sacrifices during a pandemic, when will we gain respect? When will we be prioritized in the budget? The time to take a stand is now.

As far as stipends go, a 3% stipend is NOT equal for all. Administrators receiving a 3% stipend would receive between $2000 up to $8220 in a one time bonus and an average of $3500. For ESPs, the average is MUCH lower. Paraprofessionals, our largest employee group, on average would receive $372. Half of the JESPA bargaining unit would receive $800 or less. Many JESPA employees are looking at less than $300. Although some JESPA employees who work year round at annual wages similar to administrators would receive larger one time payouts, JESPA’s collective priority is currently on our largest groups of lower wage workers where we have significant turnover and staff shortages as a result of low wages.

The district claims to do the same for everyone, but the bargaining team has examined this approach and determined that it is widening the gap between those lowest paid and those highest paid. When every employee gets a 3% raise, you can see how those making over 100k will grow their salary at a faster rate than those whose 3% raise is a few hundred dollars a year.  That’s why we prioritized raising the minimum wage.

Following the last session, the JESPA bargaining team issued this letter to the district to demand fact-finding.  Our CEA attorney, Erik Bradberry, will be representing us in this process, which is similar to an arbitration.  More information about the fact finding process will be shared as it is available. 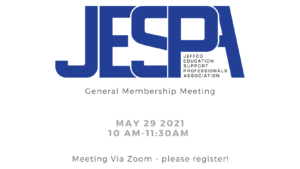 Ratification Open, Board of Education Action